I begin with a visit to Norton of a group of Mormon’s from Cheltenham that has been extracted from the Gloucester Journal newspaper of 3 June 1854.  I think it is fair to say that the writers were not impressed and put together what can hardly be described as an unbiased piece, although it still paints a colourful picture of events on that day; “… Norton bears a most irreproachable character for quietude.  Knowing this, we were fairly astonished, on Sunday afternoon last to observe unmistakeable signs of excitement there.  Mothers were hurrying with their babies, farmers and labourers were scampering, and a distinct party processioning after the manner of teetotallers and other ‘Brothers’ – that is to say, with nosegays and a band – to the top of the hill on which stands the church.  We soon perceived that the procession was formed of Mormons, and later in the evening, we looked in upon the congregation.  We found them in occupation of a cottager’s house and garden, whose owner, in consideration of the saintly character of his visitors, and slightly believing, perhaps, in the restoration of his property by a miracle, allowed his garden to be ravaged, and his herbs to be flattened by the worshippers and as many of the lookers-on who chose to enter.  We should mention that the party had come from Cheltenham, and before commencing proceedings, had refreshed themselves with tea …  The congregation was decidedly a mixed one.  There were matron of staid respect, more than one pretty girl, several green cotton umbrellas, and a few men whose attempts to look saintly were most edifying.  In attendance was an orchestra, consisting of a couple of clarinets, a trombone and a bassoon, played upon by personages in gold banded caps and a feeble attempt at uniforms.  The bandmaster had a moustache round his mouth, a startling chain of office round his neck, and altogether made a rather imposing appearance.  When we arrived, one of the preachers was standing on a bench, screeching forth in the most approved ranting style the highest spiced intelligence as to what was to become of all non-believers in his particular ideas that we ever recollect to have heard.  He informed his hearers that he was sent by the Almighty direct, that he ‘travelled for God’, and was better off than any person in England – that all lords and dukes were devils – that there were two hundred and thirty six religions, the members of which (if they didn’t at once see the error of their ways) would most assuredly enjoy the lively picture of torment he painted.  He made a sort of apology for the absence of a miracle (he said this as though he could manage one directly, but his hearers didn’t deserve one) by stating that such things were quite unnecessary in these days, and he finished his address with another picture of the uncomfortable future which awaited all Anti-Mormons, and a prophecy as to the ascendancy of the Latter Day Saints.  After the conclusion of this harangue came a hymn and after that a collection (which we believe amounted to a sixpence, a few coppers, two stones, a piece of tobacco pipe, and four gun wads) and then the ‘saint’ or ‘elder’ or whatever he called himself, spoke these business-like words (we may add that he always addressed his congregation as ladies and gentlemen except when he unwarily reversed the words) – Ladies and gentlemen, I am much obliged to you for your attendance.  There is a meeting every Sunday at Brother Curtis’ at two, where we shall be happy to see you, and give every information regarding our plan of salvation.  The congregation then vanished from the garden, the ‘elders’ or ‘saints’ went into committee upon ourselves, and seemed of opinion that our note-book was present as an engine to assist in a prosecution for blasphemy, and we saw them no more.  The congregation and the band we afterwards saw winding along the road, the latter performing an opera tune and the former singing to it.  From the specimens of the sermon we have given (and we vouch for their correctness) it may easily be imagined that the whole of it would not bear perusal.  We have heard ranters of various sorts, but never before did we hear such blasphemous rubbish issue from the mouth of man.  The frightful coarseness and familiarity with which sacred names were used, the vulgarity of the preacher, and the semi-insanity which gleamed in the eyes of one or two of the more earnest devotees, made up no pleasant picture, and it was one which could do no vast amount of good to the jeering rustics who roughly mocked and joked the preacher and his friends”.

I have only been able to identify one Norton villager who seems to have adopted Mormonism and followed his faith to America; Henry Marston.

Henry Marston was baptised at St Mary’s, Norton, on 31 January 1841, the fifth child of Henry and Mary Ann (nee Brooks).  By 1851 the family had increased by 3 more children and they were living at what is now Smithfield, past Yew Tree Farm at Norton.

Henry married Mary Goulder Hudson, daughter of Richard Coucher Hudson and Mary Goulder, on 3 July 1864 at St John the Baptist, Gloucester, and in 1871 he was living with his wife and 2 young daughters, Edith Mary and Mariam Coucher, near St Mary de Crypt in the City of Gloucester where he was employed as a labourer. In 1874 the family were still living in Gloucester but in July 1875 Henry, Mary and children Edith, Mariam, Sarah Ann Goulder and Agnes Elizabeth, still a baby, emigrated for America and on 14 July 1875 they arrived at New York, having sailed from Liverpool aboard SS Idaho.  On 4 October 1875 we find the couple remarrying at Salt Lake City, Utah, USA, presumably having already become Mormons.

On 23 February 1876 a son William Henry was born at Kaysville, Davis County, Utah, but this was not to be a time of celebration for Henry.

In 1894 Henry became a Citizen of the United States and he died on 14 February 1898 at Layton, Davis County, and was buried at Kaysville City Cemetery, Davis County.

Henry has a memorial along with both of his wives at Kaysville City Cemetery. 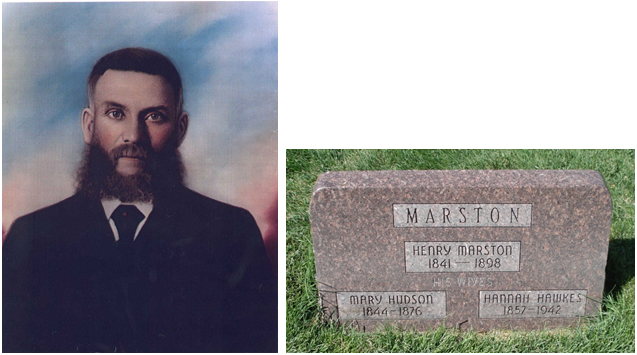