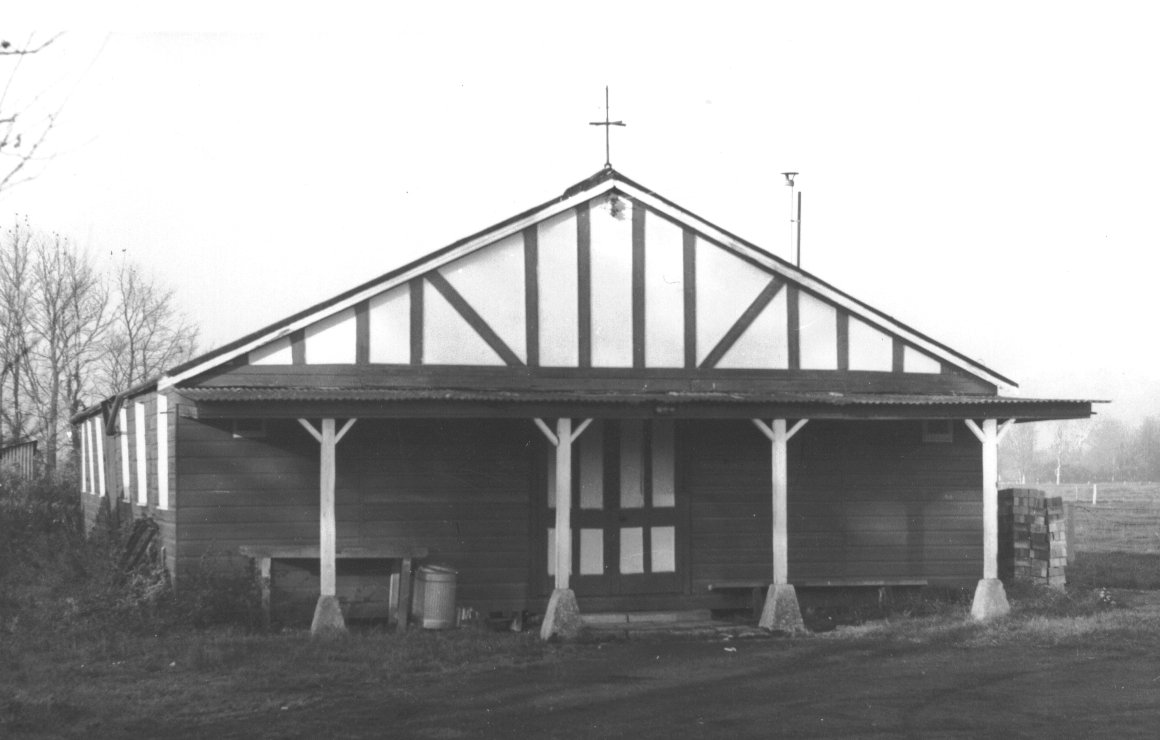 In the 1970s, Canon Evans Prosser wrote a booklet entitled “How It All Happened” about his reminiscences of events that had taken place in Norton during his time as parish vicar.  Appropriately enough for this account, the booklet was sold on behalf of Norton Village Hall Building Fund.  In this booklet he recorded the story of how Norton’s first Village Hall was acquired;

“Before we had our hall we were very limited in Norton for places to hold any kind of entertainment. For this kind of thing we mostly had to fall back upon either the school or the skittle alley at the Kings Head.  The Dramatic Society that we had for a short while before the Second World War used to perform at the school.  It was here that we staged the pantomime that I wrote for the village children to perform back in my first winter here.  It meant moving the school furniture about and erecting a temporary stage.  We had some footlights of a sort that were kept in a garage of Norton Court.  The headmaster was never very willing for us to borrow the school as it meant so much disruption and the sounds could be heard in the schoolhouse.  So for most things we fell back upon the skittle alley which for this purpose was known as the Assembly Rooms.  The WI made most use of it and many a whist drive was held there with the active co-operation of Mr & Mrs Ralph James, both members of old Norton families, who then kept the pub.  All the illuminations, both there and at the school, came from oil lamps.  When the WI had their annual elections, Mr Perrett, the schoolmaster, and I had to go to the Kings Head to act as tellers and count the votes.  For small meetings there was the Reading Room which belonged to Captain Walker.  It was of no use for anything that required a stage or for any but the smallest of whist drives.  Originally it had been procured or built by one of the vicars of Norton back in the seventies of last century [1800].  He sold it to his successor who disposed of it to Captain Walker’s father, who had it moved from its original site in Cold Elm to its present position next door to St John’s.

All this was not very satisfactory and one Sunday night during the War when Mr H A Cook and I were fire-watching at the school we decided that the time had come for the village to start raising money for a village hall.  Things began by having a fete in the field on the other side of the main road next to where the gun site had been.  This fete was a glorious success and we made £197 by it.  I well remember carrying home the money raised in two buckets.  One of the things for sale by auction was an iced cake – very difficult to get in wartime. It was bought by Mr Clinton Phelps who gave it back to be sold again.  It was then re-auctioned and bought for the same figure by Mr George Jordan who wanted it for the wedding feast of one of his daughters about to get married.

There was, however, another fund in need of money.  The village had decided to get up a Welcome Home Fund for its men who would come back from active service.  Thus all profits from any function were to be equally divided between the funds for this and for the proposed village hall.  We got up various things including two fetes that were held in Mr Minett’s orchard at the top of Wainlode Lane.  At one of these we had a display by the RAF dogs from Innsworth.  Between everything we managed to raise about £330 for the Welcome Home Fund and £400 odd for a village hall.  The difference is due to the fact that we went on getting money for the latter after the former had come to an end.

Mr Minett had promised us a site on which to put the hall and we had the £400 to buy the building.  We were hoping to purchase an old army hut or something of the kind and Mr Cook and I went round and inspected several possibilities.  Then quite unexpectedly Mr H M Spiers saw an advert in The Citizen for a dance hall down at Cinderford for sale.  The Committee made up its mind to go and see this and we set off in a few cars on a pouring wet Sunday afternoon to have a look. I had to close Sunday School early to make it.  We reached Cinderford safely and soon discovered the building that was right at the entrance of the town.  It was not a very inspiring sight in the pouring rain but when we got inside we could see that it had possibilities.  The owner told us that he had run it as a dance hall for 19 years and had evidently fancied himself as an artist as there were a number of paintings of palm trees &c on it.  We thought it had what we needed and would probably do us for 10 years or so.  The price was just within our means and we got it for £405.  All this was in October 1946.  After a while our men went down there and dismantled it and the pieces were brought up to Norton.  The actual re-erection on the site began on January 1st 1947, the very day that Mr Perrett was moving out of the schoolhouse after his resignation.  The perishing cold winter of 1946/47 had also begun with its deep snow and severe frosts, the deepest snow that had been seen in Norton for generations.

The work progressed under the supervision of Mr Cook in spite of the weather.  Of course many alterations and additions had to be made to the building.  Cloakrooms had to be put in, a stage erected and a kitchen provided.  Incidentally it is worth mentioning that the kitchen started life as a large hen house.  At this point we must record how much this village owes to Mr Cook and his men for the work they did quite voluntarily.  Hours and hours of work under very unpleasant conditions.  In recognition of all he did for this hall it was decided that it should be written into the Trust Deed that Mr Cook should be a Life-Member of the Hall Management Committee.  It was also agreed that Mr Minett himself should be so enrolled.  If he had not given us the site we could not have had the hall for we should have had nowhere to put it.

For the benefit of those who do not know it, the Trust Deed, which was modelled upon the specimen deed of the Community Council, vested the hall in the Parish Council as its Trustees and the hall could not be sold or demolished without its consent.  It also provided for a Management Committee to do the day to day running of the hall.  This committee was to consist of one representative from each recognised organisation in the village, such as the Parish and Parochial Church Councils, the WI, MU and so on, elected by themselves.  In addition there were to be five elected by the annual meeting, held in April each year, to represent the inhabitants of Norton as such.  The first Chairman was also named.  I leave you to guess who that was.  The Committee was given power to co-opt three additional members.

The great day of opening came at last.  It had been agreed to invite Mr Minett to open the new hall. So a vast number of parishioners gathered at the Village Hall on June 7th 1947 for the occasion.  A prayer was said by the vicar and we all settled down to enjoy a tea and our new hall.  Miss Mary Spiers (now Mrs Lander) had drawn up an illuminated manuscript to record the opening and this was signed on the spot by Mr Minett, the Chairman and the first Honorary Secretary, Mr A J Bradshaw.  Also a small tablet recording the event and the gift of the site was put up on the wall.  These can still be seen in the hall.

At the time, there were no mains water or mains electricity in the village but we managed in spite of this.  The hall was wired for electricity by Mr Roy Sparrow and for some time we had to light the hall by means of a generator bought from the American stores at Ashchurch. The first one we had was inadequate and we had to buy a larger one.  In case it failed, as it often did at crucial moments, we had an oil lamp suspended in the middle of the hall. 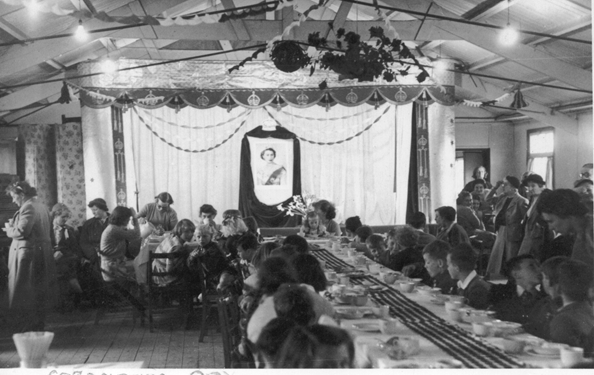 The interior of the 'Old' Village Hall at the time of Queen Elizabeth II's coronation celebrations in 1953.

Norton Village Hall has far exceeded the ten years we thought it would last but is beginning to show signs of age and for some time we have been getting together money to build a new one.  Such was our independence at the beginning that we refused to consider applying for any grants for the original hall but the situation today is completely different.  But however much better any new hall of the future may be, we still regard the present one with affection for all that it has meant to us for so long”.

A replacement building was built in front of the original hall, slowly obscuring it from view, and finally opened in 1975.

With a number of improvements and extensions this is the same hall that serves the village today.