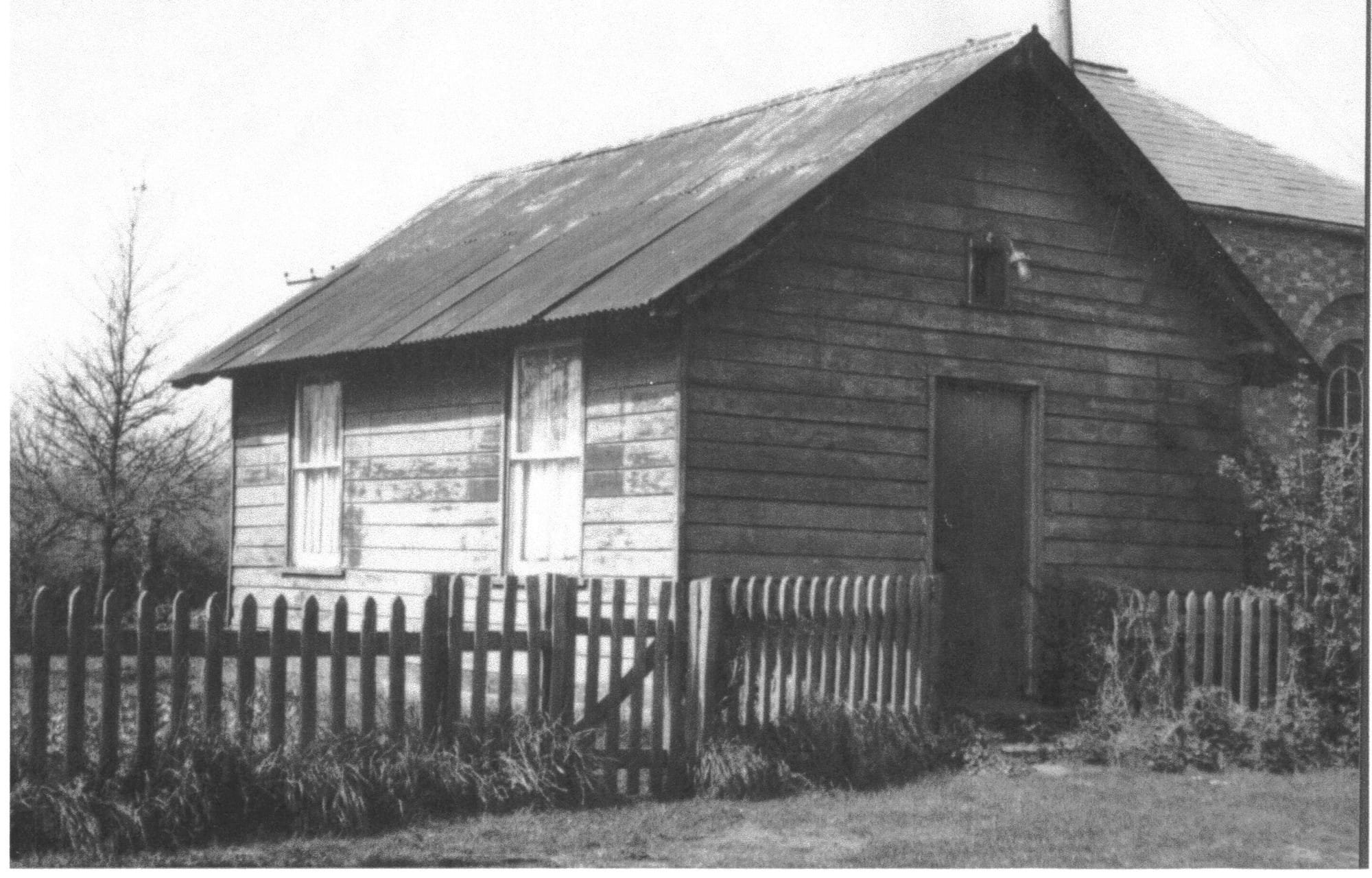 The CofE School at Norton was opened on 10 January 1876 and later that same year, in December, Rev Attwood sought permission to erect a temporary wooden reading room in the school playground, due east of the school itself.  Permission was granted in 1877.  Its original description may have included the term ‘temporary’ but it was still standing, albeit relocated to near Norton Green, more than 100 years later !!

The Gloucester Chronicle newspaper of 10 February 1877 reports on the opening, confirming the exact date and giving a detailed description of the building; “A reading-room for the working people of the village of Norton, near this city, was opened last evening.  The room which has been erected on land in the occupation of Mr Bishop, is 20 feet by 14 feet wide, and eight feet high, and is double boarded throughout.  The inside is match-boarded and varnished, the roof double felted and tarred, and the outside walls are painted Indian red with Messrs Luckes and Nash mineral paint.  The eaves project well over the roof, and give the building an ornamental appearance.  Messrs Ashbee and Son have supplied the materials.  The room stands on separate detached bricks, resting on a one-foot trench of ballast concrete, and could at any time be easily removed, or converted into a two-roomed cottage.  The total cost, including all necessary fittings is about 60l.  A gentleman in the parish has kindly advanced this amount by way of loan at 5 per cent interest, to be paid as part of the working expenses, and a small sum will be set apart every year towards repayment of the principal.  The annual working expenses will come to about 16l, and this is provided for by the subscription of the members, some of whom pay 1s a month and some 6d.  At present there are 16 of the former and 25 of the latter, producing an annual income of 16l 16s.  It is calculated that the loan will be paid off in about twelve or fifteen years.  The institution is intended and promises to be entirely self-supporting; and it is evident that what has thus been done at Norton could as easily be done in any other village, as if no one individual could be found in a parish to lend the sum required it might be obtained by several joining together for the purpose”.

The opening of the Reading Room also received praise later in that year, 1877, from the Church of England Temperance Society when a Mr Emeris spoke in approval  of the opening of a ‘British Workman’ at Norton, giving the working man something else to do as a counter attraction to the public house.

Over the years the Reading Room fulfilled a multitude of uses.  It was described as the club room or parish room, was used for vestry, parish council and other meetings, for occasional religious worship, and as a doctor’s surgery.

I have the following memory of a Mothers Union meeting at the Reading Room but unfortunately I do not know who the author was; “Before Norton had a village hall most gatherings had to be held in the Reading Room which many will remember.  During a Mothers Union meeting certain youngsters thought it would be a lark to wake things up a bit.  So from the vantage of the Chapel outhouse stones and lumps of earth were thrown onto the tin roof.  What was that noise ?  Enemy activity.  German bombers had been active recently.  Bomb splinters and shrapnel were mentioned.  The redoubtable Mrs Price was all for looking outside but was begged not to put herself in danger but she went all the same.  After all, she remembered the first war so was not so easily frightened.  We laid low and she saw nothing, perhaps she suspected something.  Many laughs were had that night.”

An inventory of parish property has been discovered dated 17 March 1941 and signed by the then parish clerk, Mary Bridges.  The inventory records the following; “At the Reading Room; 4 tables, 17 chairs, 1 clock, Sundry games and books”.

Tony Bradshaw tells us that he can remember when the Reading Room was used for the occasional church service in times of flooding.  On 4 August 1941 his sister Betty married Alf Barnes and the wedding reception was planned to take place on the lawns at Dunsworth Cottage.  Due to the poor weather this was moved and took place in the Reading Room.

So, the Reading Room was erected by the vicar, Rev Attwood and when he moved on it was taken over by his successor, Rev Steele.  When he in turn left the village Capt Walker, of Norton Court, bought it.  In the Parish Magazine of January 1969, Canon Evans Prosser wrote of the early history of the Reading Room; “The other day, I came across a letter that Captain Walker sent me years ago and which I had forgotten about.  It was written in December 1896 to Captain Walker’s father by the Reverend R. Marks who was Vicar of Norton at the time.  The contents of this puts the matter once and for all beyond doubt or speculation.  I quote from Mr Marks’ letter: ‘When Mr Steele gave up this living it belonged to him he having bought it from the previous vicar.  Your father bought it from him and removed it to its present position on this ground’.  So now we know”.

This note also confirms that as the Reading Room was standing on land that Capt Walker did not own he had it moved and re-erected next to the old chapel at The Green.

In the Parish Magazine of April 1975, Canon Evans Prosser wrote; “When the Estate was sold, Captain G N Walker wished to give it to the vicar and Churchwardens as he did not want it to be controlled by the PCC.  He told me this himself.  Eventually he was persuaded to make it over to the Diocesan Trust. This means they hold it in trust for Norton Church.  It was made a condition by Captain Walker that it must never be used by anyone for any purpose contrary to the Church of England".

The following pencil sketch was made by Jeff Powell in 1980 and depicts the reading room just behind St John’s Chapel. 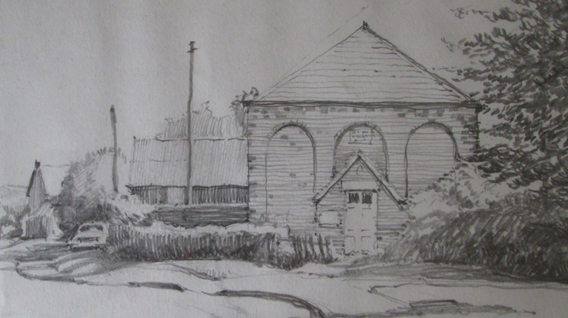 The following are memories of the Reading Room shared by Denise Blanchard; “To be able to see Dr Prior for any medical health problems you had wrong you would have to go to Churchdown to his house and he had a surgery room on the side of his house.  Other than that he came to the village twice a week, on a Monday and a Thursday, and he would hold a surgery in the little Reading Room opposite the house where Miss Mullens used to live.  …  if you wanted a prescription renewed after he’d held his surgery he would go across into Miss Mullens’ house, sit at the table and he would write you a prescription and then you would go and collect it from her.  Sometimes the weather was bitter cold and if the Reading Room was unlocked you could wait in there till Dr Prior arrived but then you all had to pile out whilst he see’d his patients and you’d hope perhaps somebody had a car you could sit in.  But you could have to stand out in some very cold weather waiting to see Dr Prior”.

The following are memories of the Reading Room shared by Margaret Stubbs who now lives opposite it’s site near The Green; “The Reading Room was being used on a regular basis for WI and Parish Council committee meetings when we moved to Norton in 1960.  There were also regular whist drives on a Friday night.  Miss Dick Mullens used to make the tea in her house opposite, Green Corners, and carry it across to the Reading Room as there was no water or any facilities to boil a kettle.  Dr Prior was also holding his surgeries twice a week – he was always running late and went into a decline if there were several people waiting.  If it was a wet day there wouldn’t be many as they had to wait outside !  The Reading Room had quite a large garden which was tended by Cecil Hadley who lived at The Green.  Cecil worked for Hurrans for many years and used to cycle to Churchdown each day.  He was a very keen gardener and was very involved with the Norton & Leigh Horticultural Society and always won lots of prizes for the vegetables he grew in the Reading Room garden. Several people took the garden over after Cecil but could never get things to grow like he did and eventually it became neglected and overgrown.  The building was eventually demolished  -  when ?”.

I’m afraid that I can’t answer the final question posed by Margaret.  I understand that the Reading Room had gone by the early 1990s but don’t know exactly when.