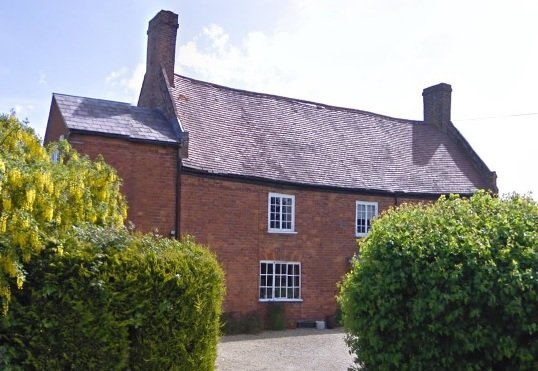 Some of the building is believed to date from the 16th Century but the first identified reference to the property was at the time of the Inclosures at Norton in 1807.

At the time of the 1851 Census, Mary White, a 47 year old born at Norton, is recorded as a farmer of 91 acres employing three labourers.  She is in residence with two daughters, a visitor and four servants.  The electoral list for the village in 1852 records a Thomas Butt as owner of a ‘farm near Worlds End’ with a Miss White as tenant and this must have been Ivy House.  The same source in 1855 still records Thomas Butt but no longer Miss White.

William Cook appears to have been owner of the farm between at least 1870 till 1879 and in the Gloucester Journal newspaper of 1 September 1877 I found the report of a fire at Ivy House farm; “Fire – On Wednesday evening a rick of hay belonging to Mr Cook of Ivy House Farm, Norton, was destroyed by fire.  The Norwich and Liverpool, London and Globe fire engines attended.  The rick contained from 20 to 25 tons of hay, and it caught fire from over-heating”.

In 1881 it was being farmed by a John Pinchin, 50 year old from Cranham, living with his wife and one daughter.

In 1885 a Samuel Parslow was farming here.

On 19th August 1898, Ivy House Farm, a messuage and farm, was sold by Mary Elizabeth Cook formerly of Widden Street, Gloucester and wife of Arthur Joseph Cook, farmer of Norton, and Joseph Mann, carpenter of Norton, to Edwin Taylor, butcher of Barton Street in the City of Gloucester.  The Schedule of farm taken from the Deeds at that time described the property as follows :-

John Bevan was still the tenant in 1900.  On 3rd August 1901 both of Edwin Taylors mortgages were paid off.

In 1901 the tenant was recorded as John Moody Coleman, a 48 year old farmer from Hartbury who was living with his wife and one servant.  Both John Bevan and John Coleman are listed in 1902 but by 1903 it has changed again to Charles Baker and in 1910 a Thomas Batterton was tenant with the farm still owned by Edwin Taylor.

The following piece was written by a Mis Riddick, now of Dursley, based upon her mothers recollections of the farm :-  “My mother lived at Ivy House Farm from 1916-1924, previously her family (Groves) lived at Church Farm .  Ivy House belonged to someone called Taylor (my grandfather rented the farm), he lived in Cromwell Street, Gloucester.  There was a pond opposite the cowsheds and a pump on the lawn to the left of the house but it never had any water.  Water was brought by float from a house at the end of the lane owned by someone called Hopkins.  Fields and orchards belonged to it, across the yard another pond with eels in it.  There was a barn, cowsheds, stables and a cider mill in front.  There was a large chestnut tree nearest Marlpit Lane.  There was a dairy behind the cheeseroom, 4 bedrooms plus attics, a sitting room on the right hand side of the front door and a living room to the left, a lean-to kitchen behind the living room.  The windows had large panes of glass.  At the end of the house there was an outhouse, a fireplace and wash boiler.  The building on the end was a separate cottage with its own front door”.

Edwin Taylor appears to have died in 1936 and the farm was put up for sale.  The following is reproduced from the auction leaflet; “Bruton Knowles & Co are instructed by the executors of Mr Edwin Taylor, deceased, to sell this valuable freehold property by auction at The Bell Hotel, Gloucester, on Saturday 18th July, 1936 at 3 o’clock punctually.  Particulars of sale of Ivy House Farm, an excellent small pasture farm occupying a convenient situation at Priors Norton within half a mile of the main Gloucester to Tewkesbury road about four miles from Gloucester and five from Tewkesbury.  It comprises a farmhouse, buildings, pasture and pasture orcharding, containing an area of about 58a 1r 24p…. The farmhouse is placed conveniently near to the road at Priors Norton and is constructed of brick with tiled and slated roofs.  It contains on the ground floor: hall, sitting room 16’3’’x12’ with cupboards, living room 16’3’’x13’ with cupboard and shelves, sitting room 10’8’’x10’3’’, cheese room, dairy, back kitchen with shelves and on the first floor are three bed rooms, small room that could be used as a bath room, and two store rooms.  On the second floor are three attics.  Adjoining the house is a wash house with furnace and baking oven.  The water supply is obtained from a well in the garden.  The buildings comprise a brick built cider mill house with mill and press and granary over, and adjoining are stables for four horses with loft over, timber and iron cow shed for eight cows with concrete floor, three-bay open cart shed of timber and iron, trolley shed and poultry houses and timber and iron shed with manger.  The farm is compact, occupies a good position, and is entirely sound old pasture.  The purchaser will be required to pay in addition to his purchase money the sum of £101 in respect of the growing timber.  The farm is let to Mr L J Gingell on a Michaelmas tenancy at a rent of £100 a year.  The property is subject to a right of way adjoining the boundary fence in the south east corner of No319 on the sale plan”.

On 24th September 1936 a land search was requested by Madge, Lloyd & Gibson of 20 Bell Lane, Gloucester.  The named owners of the farm were on the Deeds as; Edwin Taylor, retired butcher, of 27 Cromwell Street, Gloucester, Edwin Taylor (the younger), butcher, of 50 St James Street, Gloucester, Annie Kate Shatford, wife of William Henry Shatford of ‘Morningside’, Upton St Leonards, Gloucester, (on 19 August 1964 she was noted to be living at 37a London Road, Gloucester).  On 26th September 1936 the farm was sold by Annie Kate Shatford to Sidney Herbert Smith of Hurst Farm, Lydney (also from Duncombe House, Bulley, Churcham, Glos) for the sum of £1800.  On these Deeds, Edwin Taylor (the younger) was noted as deceased on 18 February 1931.  Later Sidney Smith entered into an agreement with Arthur George Dix, engineer, of 20 Hauman Road, Gloucester, and Jessica Edith Elliot and Maurice Frederick Elliott also both of 20 Hauman Road, Gloucester, to make all four equal sharing tenants in trust for sale.

A Ministry of Agriculture farm survey dated 1941-3 recorded that Ivy House was owned by Mr H Smith and farmed by Louis Gingell.  It was a mixed farm and rated ‘Class B’ due to lack of capital.  Louis Henry and Maud Elizabeth Gingell were still at Ivy House Farm in 1955.

On 16th November 1963, Maurice F Elliott, now at Cranford Farm, Pucklechurch, Jessica E Elliot and Arthur G Dix, paid off £3500 to Sidney Smith for his share to become three equal owners and on 18th November 1963 part of farm was sold in equal parts by Arthur Dix and the Elliotts to Richard Eric Beale of Benges Farm, Priors Norton, for £11500.

The Griffiths’ remained at Ivy House Farm for nearly 20 years until December 2000 when they moved to Dorset selling to the current owners.

[Thanks to Lindsay Griffiths, who lived at the farm from 1983-2000, for sharing details from the surviving Deeds].