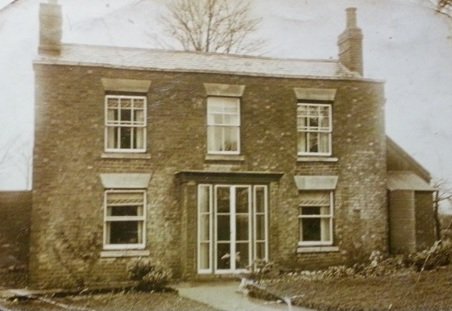 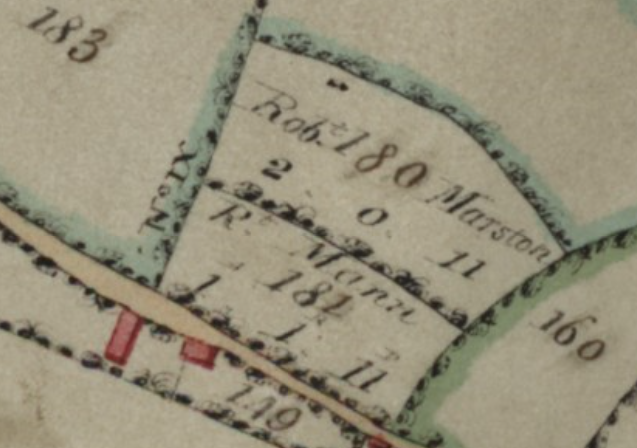 In a bundle of Norton Court Estate deeds I found an ‘abstract for sale and conditions’ dated 16 July 1853 and shortly after that, dated 6 August 1853, a conveyance from Mrs Hester Mann and others to William James.  This marks the start of William James’ ownership of the land and according to two bricks in the south wall of Dunsworth Villa still today, inscribed “WJ 1854”, the year the property was built.  William James built a successful business in Norton during the Victorian era founding a thriving chair making workshop in the village and employing eight other men in this trade.  This may have given him the means to afford such a project.

In 1871 a map of the Norton Court Estate shows the laneside plots at Dunsworth owned by William James and Thomas Marston.  It would appear that William James owned plot No 181 and Thomas Marston plot No 180, which had previously been held by the Marston family.  Strangely no houses are shown on either plot at that date although we know for sure that Dunsworth Villa had already been constructed.

In November 1872 William James received payment of £10 from Charles Walker, of the Norton Court Estate “… for the abandonment of the use of cart and footways from the Parish Road through Mr James’ property into or through the land purchased by him of Mr Marston and undertaking to remove stiles and gateways and to make good fences between the two properties”.  This suggests that it was shortly before this date that the land where Dunsworth Cottage now stands passed into the ownership of the Norton Court Estate. 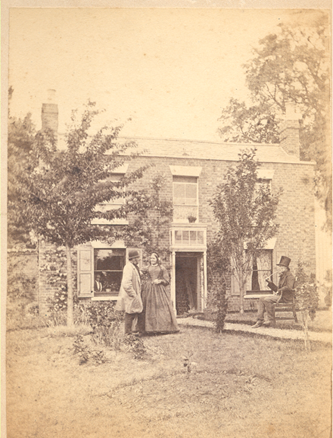 The James family at Dunsworth Villa.  Check out the clay pipe of the seated gentleman in the top hat.  Jon Wrench, the current owner of Dunsworth Villa has found a number of broken clay pipe ends in the garden at Dunsworth which suggests that either the smoker lived there or was a regular visitor; perhaps this is even William James himself ?

William James died on 5th November 1882 and his Will dated 7th June 1880 recorded him as a licenced victualler (He also held the license for the Red Lion Inn at Wainlode).  William passed his estate to his sons William and Richard on trust to permit his wife Ann to receive rents from Dunsworth Villa for her life time.  A mortgage of £142 was owed to Julia Ann Browning (the wife of Benjamin Browning, a Gloucester ship broker) and Hannah Leach.

According to a headstone in St Mary’s churchyard, Norton, Emma the wife of William Cook of Court Farm died in 1893.  The death of his wife appears to have persuaded William to give up his farm and move on and as Dunsworth Villa was available he appears to have chosen this house.  By 1894 William Cook was in residence and Court Farm was being run by his son, Arthur Joseph Cook.

Amongst Norton Court Estate deeds is a conveyance dated 21 December 1894; “…by Julia Ann Browning (the surviving mortgagee) and William James and Richard James the devises in trust for sale under the Will of William James deceased to George Norton Walker of the messuage etc known as Dunsworth Villa with cottage, stables, outbuildings, garden and orchard land situate near The Green at Norton then formerly said to contain 1¼ acres but then stated on the Ordnance Survey to contain 1a 3r 0p for many years in the occupation of William James deceased but then of William Cook and another freed from the mortgage debt”.  Dunsworth Villa was sold to George Norton Walker on 21st December 1894 for the sum of £420 and stayed as part of the Norton Court Estate until 1952.  William Cook remained the resident at Dunsworth Villa until his death in 1906.

In 1894 Frederick George (known as George) Stephens, was living with his wife and young children at Dunsworth Cottage where he was employed as a gamekeeper.  With enfranchisement extending quite rapidly throughout the later nineteenth century the conditions for being granted a vote were complicated and ever changing.  As a result there appears to have been many instances where Revision Courts were held to discuss and decide on individual cases.  “George Stephens, of Lane Side, Norton, claimed in respect of a ‘dwelling-house joint’; and Mr Docwra contended that there was no such qualification in law”.  It was proposed to simply cross out the word ‘dwelling’ to make it acceptable but apparently this was another franchise altogether, under “a much more ancient franchise than the dwelling house franchise”.  After some arguing it was remarked that none of the discussion counted for anything if the house in question had a value of less than £20 and its actual value turned out to be only £7 10s.  George’s right to vote, based on his residing at Dunsworth Cottage was disqualified.

In the first half of the twentieth century many of the properties in Bishops Norton were still owned as part of the Norton Court Estate with incoming tenants having to sign a rental agreement, often with very specific terms, before taking up residence.  On 31 December 1919 one such agreement read; “A Bradshaw and May his wife of Norton, cottage No 6 known as Dunsworth Cottage, in the occupation of George Stephens, from 25th December 1919, at yearly rent of £10 payable monthly, the tenant to work in the parish of Norton”.  Many years ago I was given an account by Tony, the son of Alfred and Ada Bradshaw, where he talked about the family coming to the village; “After they married father was advised for his health to obtain work and live in the country.  He was told that Capt George Norton Walker, a gentleman who owned most of Norton, had a wish to employ ex-servicemen where possible and he obtained a job on the Estate and moved to Norton to live.  At first they had rooms in the left hand cottage of the two still standing on The Green, next to the old chapel.  The tenant in Dunsworth Cottage was not employed on the Estate yet lived in one of Capt Walker’s cottages.  In order to provide a home for mother and father this tenant was given notice to quit and of course this did not go down well and did not endear my parents to villagers”.

George Stephens had been living at Estate No 6 at the time of the Ladyday Rental payments of 1908 when his rental had been assessed at £7 per annum.  He had previously been the Estate gamekeeper but the above comments from Tony Bradshaw would imply that he had ceased this employment by December 1919 and may not even have been employed in the parish disqualifying him from renting Dunsworth Cottage.  I believe that the Bradshaw’s remained at Dunsworth Cottage throughout the rest of the lives.  Alfred Peter Capon Bradshaw died on 25 November 1955 aged 58 years, and his wife Ada Mary died on 11 February 1981, aged 81 years.

The next recorded occupants of Dunsworth Villa were William and Louisa Ann Churchill who were in residence between 1910 and 1921.  Louisa died in August 1915 and William in May 1921; both have a memorial at St Mary’s, Norton.

By 1923 an Albert Thomas and wife Lillie Hunt were living at Dunsworth Villa and were still there in 1927.  Albert worked at Priday Metford Flour Mills in Gloucester and the family attended Ryecroft Methodist Church, Gloucester.  They had three children; Frances Muriel, Kathleen Elsie and George.  They left Dunsworth Villa to run a grocery shop in Worcester Street, Gloucester, and delivered their produce by handcart.

In 1931 the occupants of Dunsworth Villa were Captain Arthur Huntingford, RAMC Retired, his wife and daughter Phylis Marjorie. By 1935 occupancy had changed again to John Walling, wife and children; John Jnr and Alice.  The next occupants were Mr and Mrs Fern who were in residence in 1940.

Betty Barnes (nee Bradshaw) relating her Queen Eliabeth II Coronation memories from 1953; “There was no electricity in the village then of course and my brother Tony worked for the ‘War Ag’ so he got this generator and television.  There was quite a few of us in our little room, which wasn’t very big, at Dunsworth Cottage, mothers home, mothers and fathers.  If I remember rightly there was sixteen or eighteen people in that little room watching that television – we were so lucky.  It was a small nine inch black and white set in a sort of cabinet.  The television stayed but the generator made too much noise and they didn’t use it that much afterwards but that’s the most I can really remember.

There was obviously a children’s party but you see the barrels are there so there must have been something after.  But you see, I’d have been going home wouldn’t you, with four children you wouldn’t be staying out at night.  They must have had races or something in the afternoon.  Of course there still wouldn’t have been much food about then.

In 1952 Norton Court Estate was broken up and sold; LOT 13, Dunsworth Cottage;  “A detached brick and tiled cottage adjoining the previous Lot and containing: Two sitting rooms, back kitchen with sink and draining board, larder and two bedrooms.  Garden, EC, well of water and brick and tiled loose box.  The enclosed verandah, green house and garage are claimed by the tenant.  In the occupation of Messrs A and M Bradshaw at a rent of £10 per annum.  This lot is sold subject to the owner of this Lot and the owner of Lot 12 equally sharing the cost of maintaining the lane leading to this lot”.

LOT 12 was Dunsworth Villa but I don’t seem to have the extract from the sale leaflet for this property.

Frank Bridge was the village milkman and was resident at Dunsworth Villa until his death.  Frank’s wife, Mary Elvira Theyer Bridge stayed on until her death on 12th January 1977.  Dunsworth Villa was sold at auction on 29th July 1977 to Edith Irene Papps and husband Wilfred Stanley.