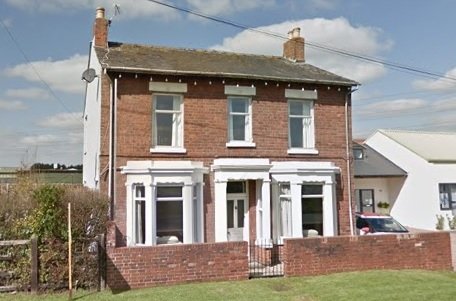 The earliest reference I have identified for this farm comes from the OS, 25inch, 1st Edition, map dated 1844-1888 at which time it was going by the name of ‘Vicks Barn’.  At the time the Inclosures came to Norton in 1807 there was no building on the site so that provides a rough idea as to when it was built.

In the terrier and valuation of the messuages, lands, and other hereditaments liable to poor rate in the parish of Norton from 1838 Richard Vick held a 60 acre un-named farm.  In the 1841 Census we also find a Richard Vick, farmer of an un-named property at Norton.  A document that appears to date from the 1840s, when Miss Elizabeth Frances Webb held the manor of Norton, records who occupied each of the farms on the estate.  The report closes with a note detailing the valuations of the farms at Norton that belonged to Edward Webb in terms of size and money; Richard Vick’s farm was 10-1-19 valued at £35.  By the time of the 1851 Census Richard Vick was farming 80 acres and employing 4 labourers, at Cold Elm, at a still un-named farm.  The map is the only document at this time that confirms Richard Vick was at what we now know as Barn Farm.

By the time of the 1861 Census the property had acquired a name, was known as Cold Elm Farm and was held by Henry Merrett who was living there along with his wife Emily, brother John, and two young children. The farm was described as being 60 acres employing 5 labourers.

The Gloucester Journal newspaper of 15 March 1862 included a sale advertisement whereby, on 26 March 1862, H Bruton was instructed to sell by auction; “3 valuable and powerful cart geldings and mare, in foal; half-bred brown gelding, 5 years old, 14 ½ hands high, with black legs, a capital hack and steady in harness; 2 promising two-year-old cart colts, 2 yelts (one in farrow), rick of prime hay and clover, stack of ditto, and rick of well-harvested white wheat, to go off; 1300 gallons of best and family cider and perry, capital casks and hogsheads, excellent farming implements, spring cart, harness, home-cured bacon, &c”. The instructions came from Mr Merrett who was quitting the estate and the farm being sold was named again as ‘Cold Elm Farm’.

It would appear that the Merrett’s time in the village had been very brief as they were not here in 1851 and the age of the eldest of their two children who had both been born at Norton was only two years, so perhaps their time here was limited to 1859-1862.

In 1889, I found a William Wakefield, first appearing at Norton and qualified to be on the Electoral Roll as tenant of a roadside property with land and a tenement.  The 1891 Census confirms William farming a property known as The Barn.  A Henry Wakefield is listed in Kelly’s Trade Directory as a farmer in 1885 but does not appear anywhere again so perhaps these were one and the same person and there was some confusion over their names.  William Wakefield was born at Elmore, Gloucester, in 1848 and in 1851 was living with his single mother and sister Louisa, at Gloucester Union Workhouse, St Catherine’s, Gloucester.  He appears to have had relatives in this area which is probably what brought him here.  In 1891 he lived with his widowed mother, Mary Basely of Elmore, and a nephew, Frances Nash of Norton.  By 1901 his mother had died and he was living at what was then finally named as Barn Farm with an uncle and aunt, Joseph Lyes from Down Hatherley, who worked on the farm with him, and Eliza Lyes, a domestic housekeeper originally from Elmore; perhaps his mother’s sister.

By the time of the OS, 25inch, 3rd Edition, map dated 1898-1939 the name of the farm had officially become Barn Farm but otherwise it still looks much the same.

As the result of a new Finance Act a national study was conducted in 1910 resulting in what was dubbed the Domesday Book.  In the section referring to properties at Norton we find that Barn Farm was owned by Richard Butt and Charles Brooke and had named tenants of William Wakefield and William Cooke.  Joseph Lyes was still at the farm in September 1913 when he died, aged 84 years, and was buried at St Mary’s, Norton.  William Wakefield continued to appear in village records until 1919 so would appear to have left at the time of the sale of Barn Farm, hence the vacant possession.

Barn Farm was put up for auction, by Miss Butt, on Saturday 5th June 1915 at The Bell Hotel, Gloucester.  The following is an extract from the Bruton, Knowles & Co auction leaflet that gives a detailed description of how the property would have been constituted at that time.

“THE BARN FARM.  A valuable freehold small farm conveniently situate on the main road from Gloucester to Tewkesbury, about 3 miles from Gloucester.  It comprises a farmhouse, farm buildings and about 25a 0r 11p of superior pasture orcharding, pasture and arable land, of which the following is a schedule taken from the Second Edition of the Ordnance Map :-

No 210 has been laid down by the tenant, who has the right to break up. The farmhouse is brick built with slate roof, contains sitting room, three bed rooms, box room, kitchen, dairy and pantry, and there is an outside back kitchen with furnace and pump.

The farm buildings, adjoining a fold yard, comprise open shed, brick built and tiled, the two ends of which have been enclosed by the tenant, second open shed, a barn, built of brick and timber (good barn, sound timbers) with corrugated iron roof, and cart-house at one end with thatched roof, poultry house, cart stable for three horses, etc.

The land lies in a ring fence with long frontage to the main road, (780ft frontage), and is bounded on other sides by property of the Ecclesiastical Commissioners, Mrs C E Turner, and G Blizzard Esq.

The farm is let to Mr William Wakefield at £50 a year, the tenancy expiring on the 29th September, 1915, when vacant possession may be had.

The next reference I have found was in 1924 when the farm was owned by Charles and Alberta Brooks, probably the Charles Brooke from 1910.  He would have been at the farm at least a few years earlier than this as in September 1920 an Edgar Charles Evans Brookes, aged 17 years, of Barn Farm, was buried at St Mary’s.

I can find no record of the tenant at Barn Farm again until 1931 when Louis Henry Gingell is recorded in Kellys Trade Directory.  In that same year an Owen Randall first appeared at Ivy House Farm.  This last reference becomes relevant as by the time of the 1935 Directory Louis Henry Gingell is at Ivy House Farm and Owen Randall at Barn Farm; the two appear to have swapped tenancies.

At some time in the late 1930s the property was taken over by George and Millicent Pullin who had at least three children, Roy, Graham and Vera.  They appear to have been tenants of Charles Brookes and were still at the farm during the Second World War when they took in an evacuee, John Doak from Aston, Birmingham.  John returned to Birmingham on 16 October 1939.  [Peter Doak, most likely John’s brother, lodged with Mr Spencer at The Red Lion Inn and remained a little longer, returning to Birmingham on 1 April 1940].  In a Ministry of Agriculture farm survey from 1941-3, Barn Farm was described as being “Class A, chiefly a dairy holding”.

In the 1980s Barn Farm was home to the Cullimore family.

Around the year 2000 the farm seems briefly to have been known as Buttercup Farm but returned to Barn Farm once again.

In 2019 the old farmhouse was put up for sale, without a name or reference to its past at all.  It was priced at £325,000 and described as being; "A Spacious Bay Fronted Detached Home In Norton. Internally this property consists of an entrance hall leading to a modern kitchen, a large living/dining room and a shower room. On the first floor there are three bedrooms and a family bathroom. Outside the property benefits from a large garden and a driveway providing off road parking.  Entrance via door to hall. 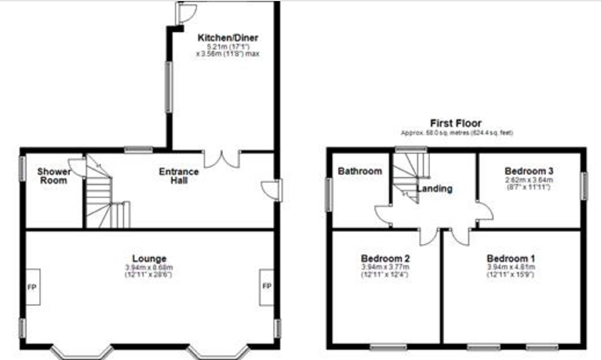